Refik Anadol Studio was commissioned by the Los Angeles Philharmonic to help them to celebrate their history and explore their future as a highlight of their centennial celebration. Using machine learning algorithms, Anadol and his team has developed a unique machine intelligence approach to the LA Phil digital archives - 45 terabytes of data. The results are stunning visualizations for WDCH Dreams, a project that was both a week-long public art installation projected onto the building's exterior skin and a season-long immersive exhibition inside the Ira Gershwin Gallery

To make Walt Disney Concert Hall "dream," Anadol utilized a creative, computerized "mind" to mimic how humans dream - by processing memories to form a new combination of images and ideas. To accomplish this, Anadol worked with the Artists and Machine Intelligence program at Google Arts and Culture and researcher Parag K. Mital to apply machine intelligence to the orchestra's digital archives - nearly 45 terabytes of data - 587,763 image files, 1,880 video files, 1,483 metadata files, and 17,773 audio files (the equivalent of 40,000 hours of audio from 16,471 performances). The files were parsed into millions of data points that were then categorized by hundreds of attributes, by deep neural networks with the capacity to both remember the totality of the LA Phil's "memories" and create new connections between them. This "data universe" is Anadol's material, and machine intelligence is his artistic collaborator. Together, they create something new in image and sound by awakening the metaphorical "consciousness" of Walt Disney Concert Hall. The result is a radical visualization of the organization's first century and an exploration of synergies between art and technology, and architecture and institutional memory. To actualize this vision, Anadol employed 42 large scale projectors, with 50K visual resolution, 8-channel sound, and 1.2M luminance in total. The resulting patterns, or "data sculptures" formed by the machine's interpretation of the archives were displayed directly onto the undulating stainless-steel exterior of Walt Disney Concert Hall. WDCH Dreams' accompanying soundtrack was created from hand-picked audio from the LA Phil's archival recordings. Sound designers Robert Thomas, and Kerim Karaoglu augmented these selections by using machine-learning algorithms to find similar performances recorded throughout the LA Phil's history, creating a unique exploration of historic audio recordings. Inside Walt Disney Concert Hall, in the Ira Gershwin Gallery, an immersive and interactive companion installation offers a unique, one-on-one experience for each gallery visitor. The exhibition presents the entire LA Phil digital archives in a non-linear fashion. The visitor, via a touchscreen interface, can interact with the archives in multiple ways: via a sunburst timeline; through curated moments highlighting milestones in the LA Phil's 100-year history; and by delving into to the entire data universe that can be uniquely manipulated by each gallery visitor. The space is re-imagined as a mirrored U-shaped room with two-channel projection. Visuals are projected onto the mirrored surface giving the visitor a truly immersive, 360-degree experience. 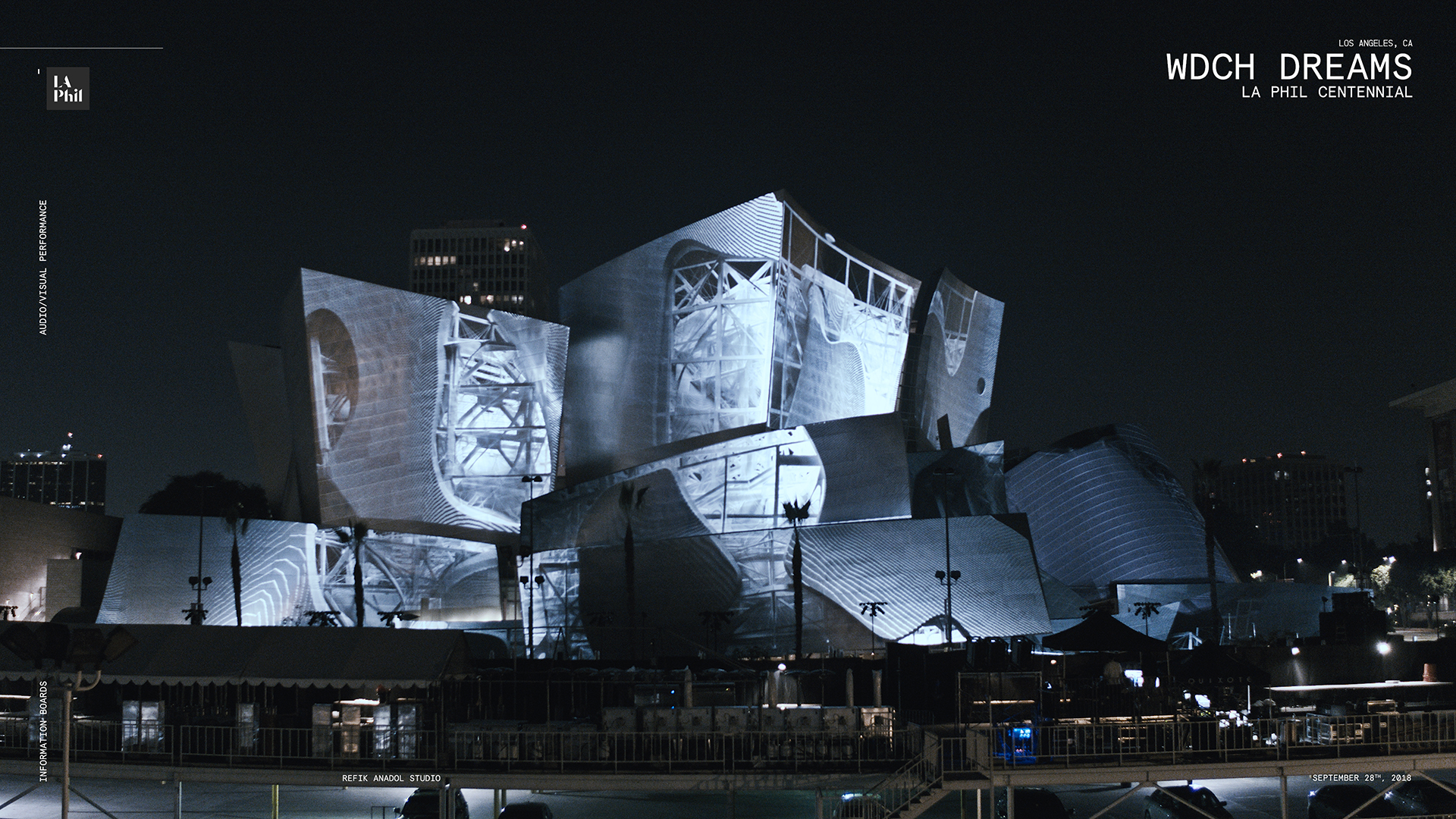 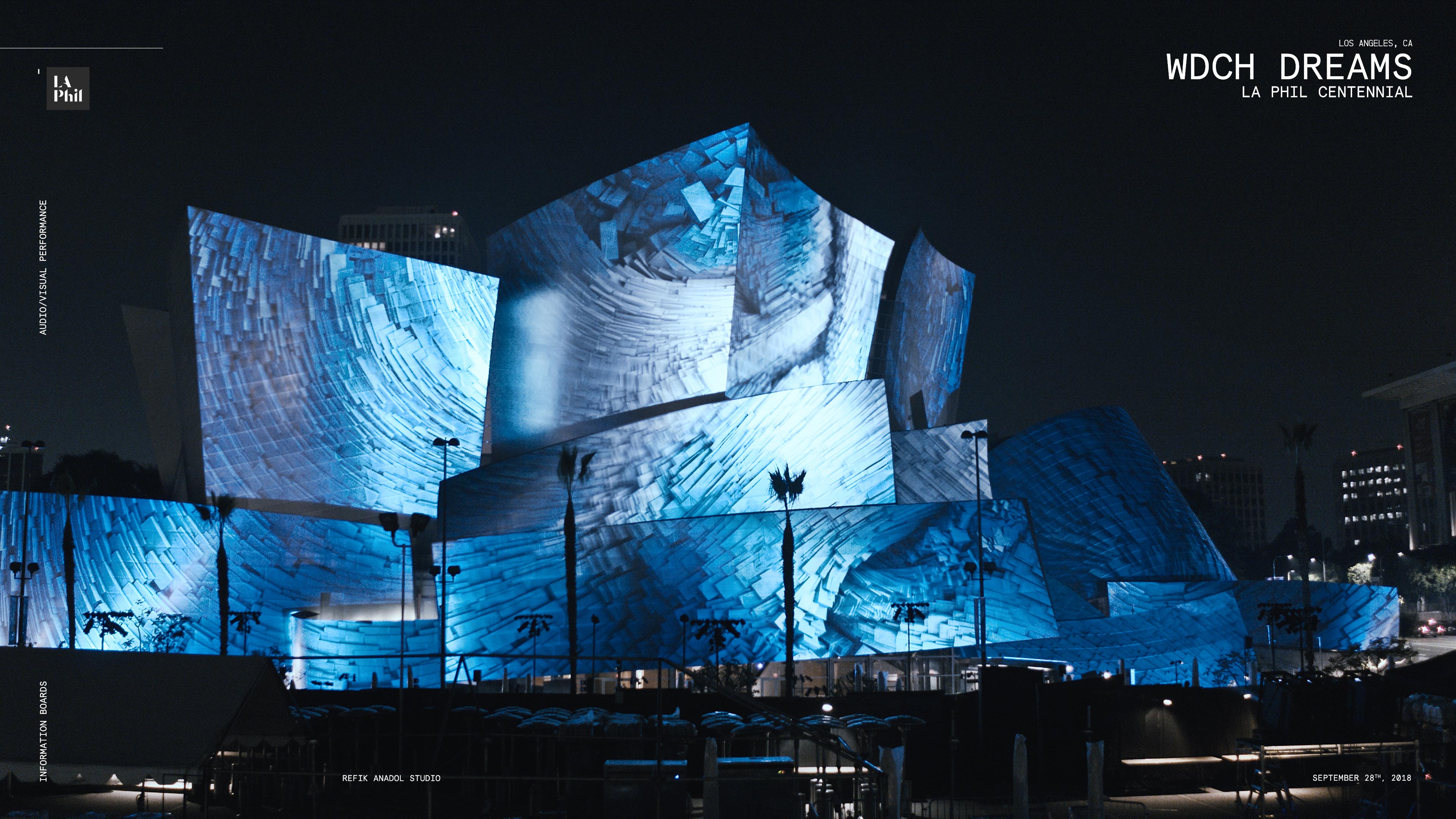 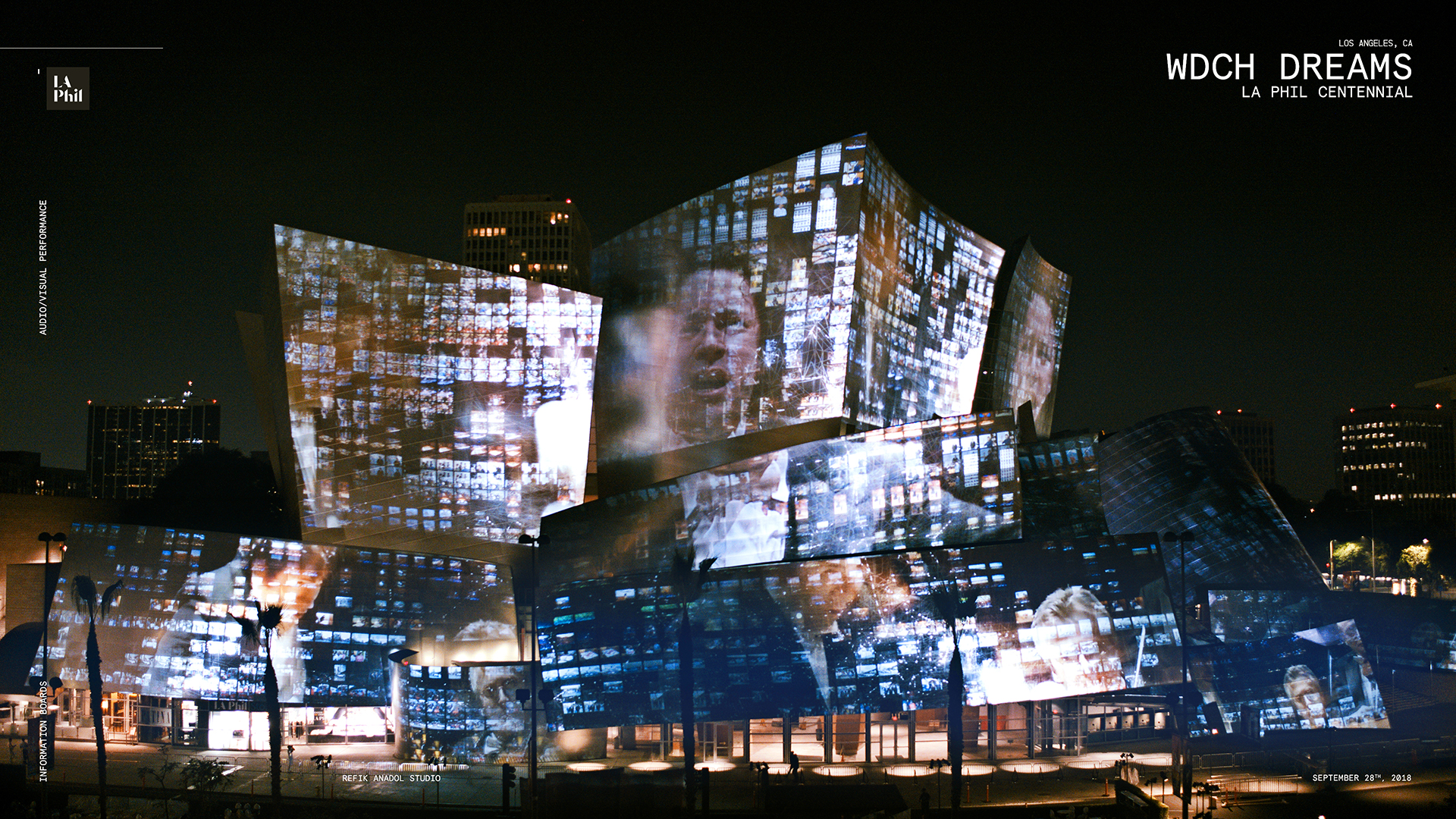 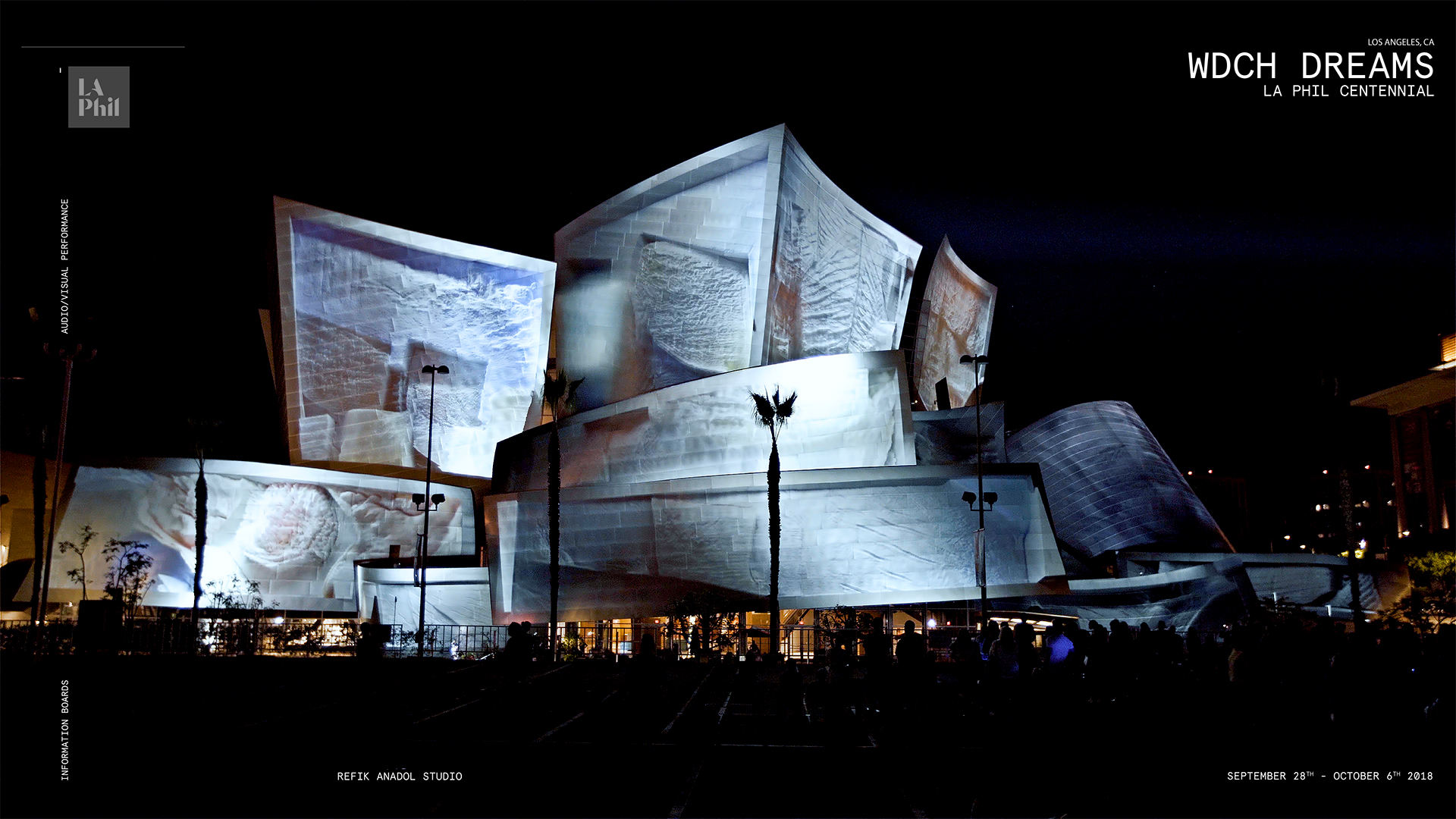 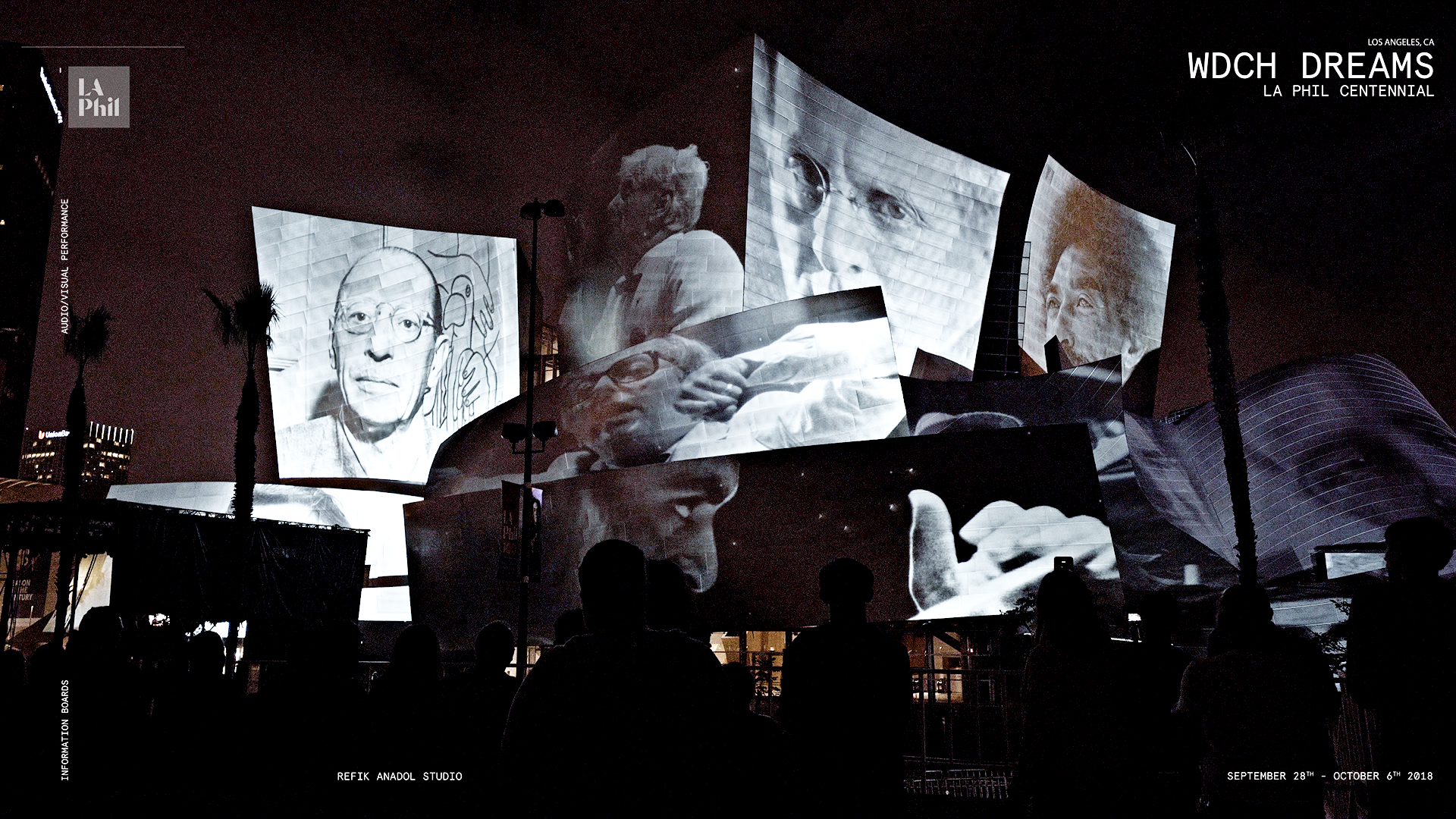 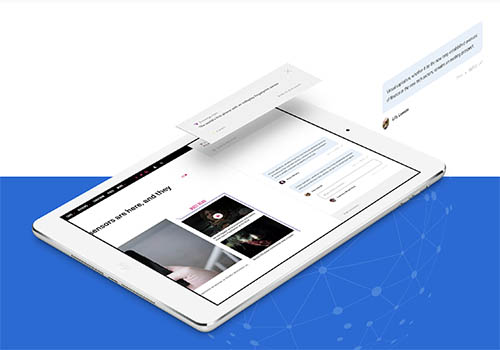 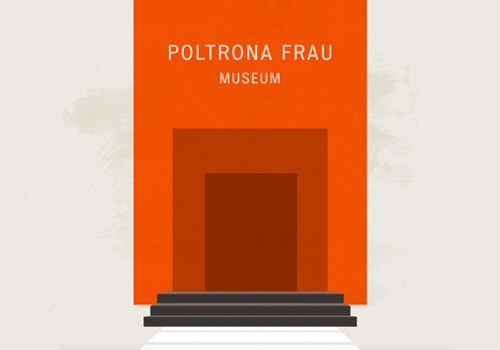 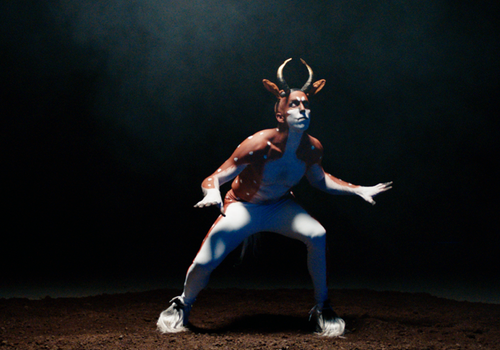