The New Year celebrations in prominent metropolitan cities tend to be always magnificent and, if possible, unique. But, unfortunately, this wasn't the case in many European places for year 2021 due to the pandemic restrictions. Luckily for Serbia's capital city of Belgrade, the situation was very different. In collaboration with our partner Kvant Show Production from Slovakia and Grucci from USA, we produced this spectacular and amazing multimedia show on the highest skyscraper in Belgrade Waterfront on New Year's Eve 2021. From idea to production. The building was a site construction with works in progress and with various weather conditions. We had to install all lasers and beam lights on the facade by alpinists from the top downwards. The hardest part of the operation was installing all the equipment onto the building's facade, which was still undergoing works in progress, with several teams of workers present. Within ten days, the climbers installed dozens of purpose-made and structurally certified fitting brackets to which all the lighting fixtures were attached afterwards. Laser team tested the functionality and water resistance of all the equipment and connections during this phase. At the same time, technicians were preparing laser display projectors and moving heads and descending them on ropes in special protection covers down to required locations. The rest of the team prepared all the signal and power cabling inside the building. In the end, we run the two 600 metre lines of the main-signal optical cable to the central control room. All of this happened with 500 builders working on-site, during building works in full swing, in all kinds of weather conditions and under strict health and safety regulations. SKYMUSIC was supplier for supporting lights on facade, powerful EAW ANYA sound system and stages, live TV and online broadcasting. Kvant Show Production was supplier for 56 pieces of laser projectors with power up to 30 W, 24 pieces of outdoor moving heads Aqua Beam 580, video content on media facade, and programming, synchronizing and producing the whole show. Grucci was supplier for fireworks from the building and waterfront. 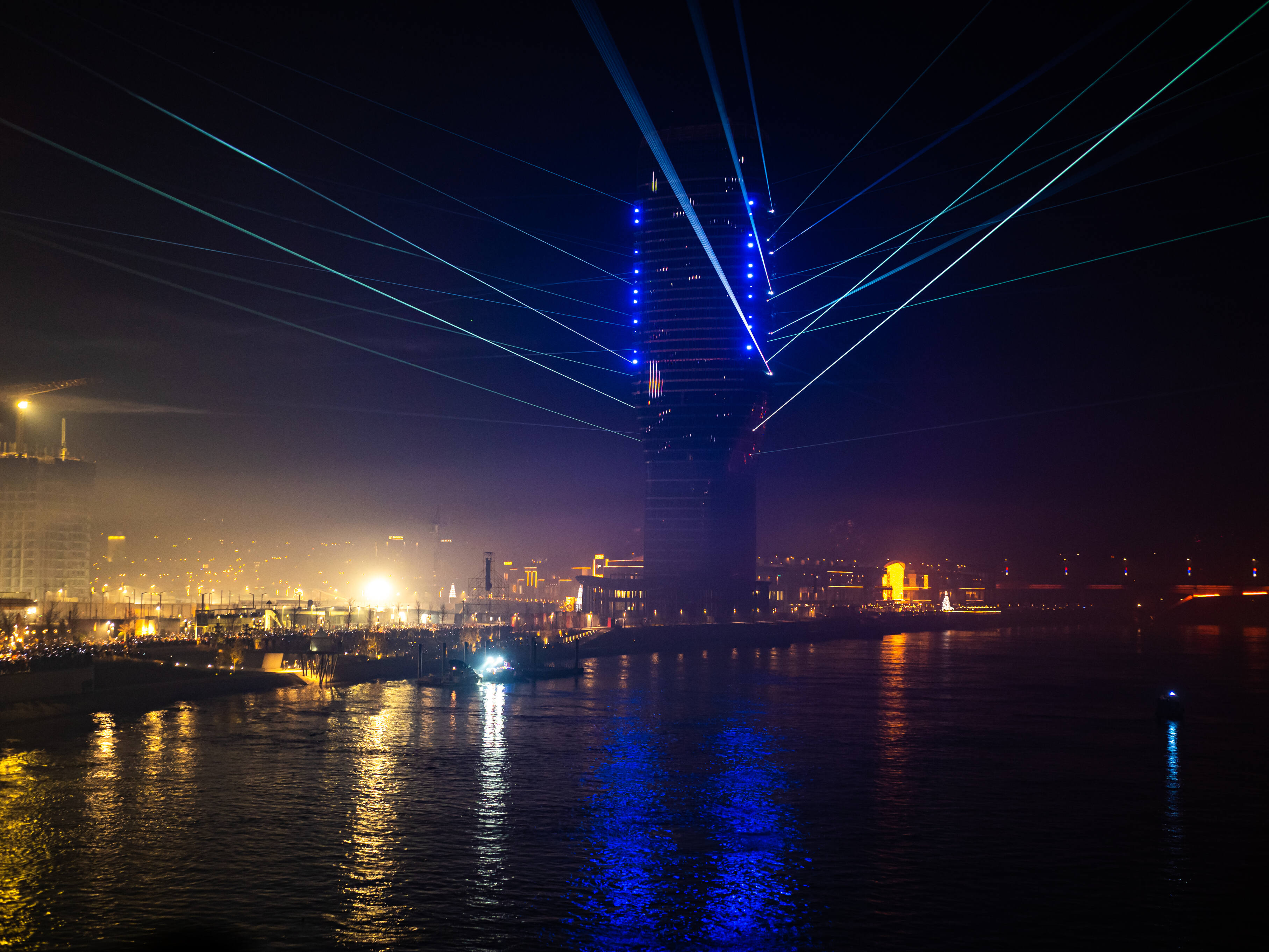 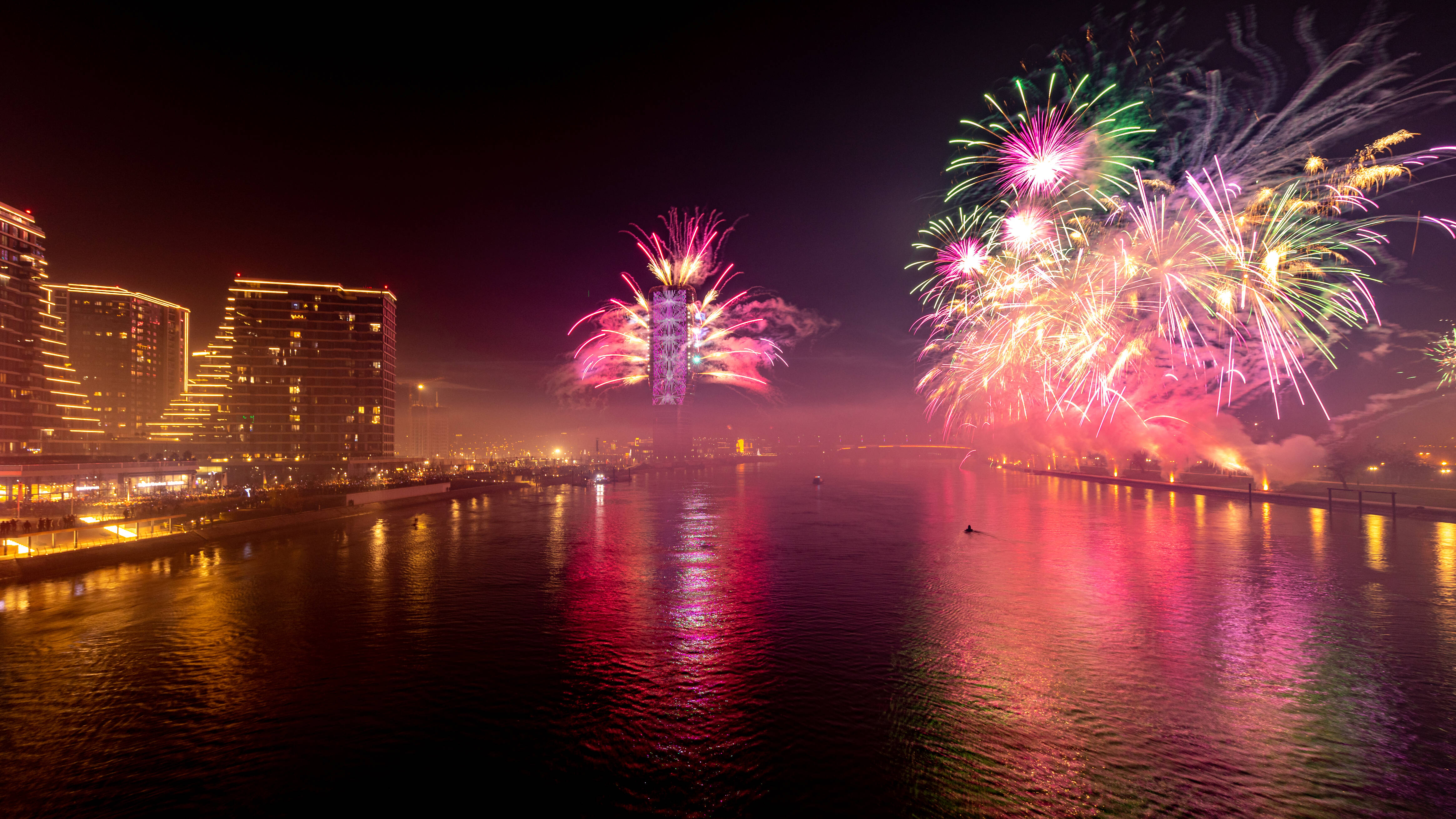 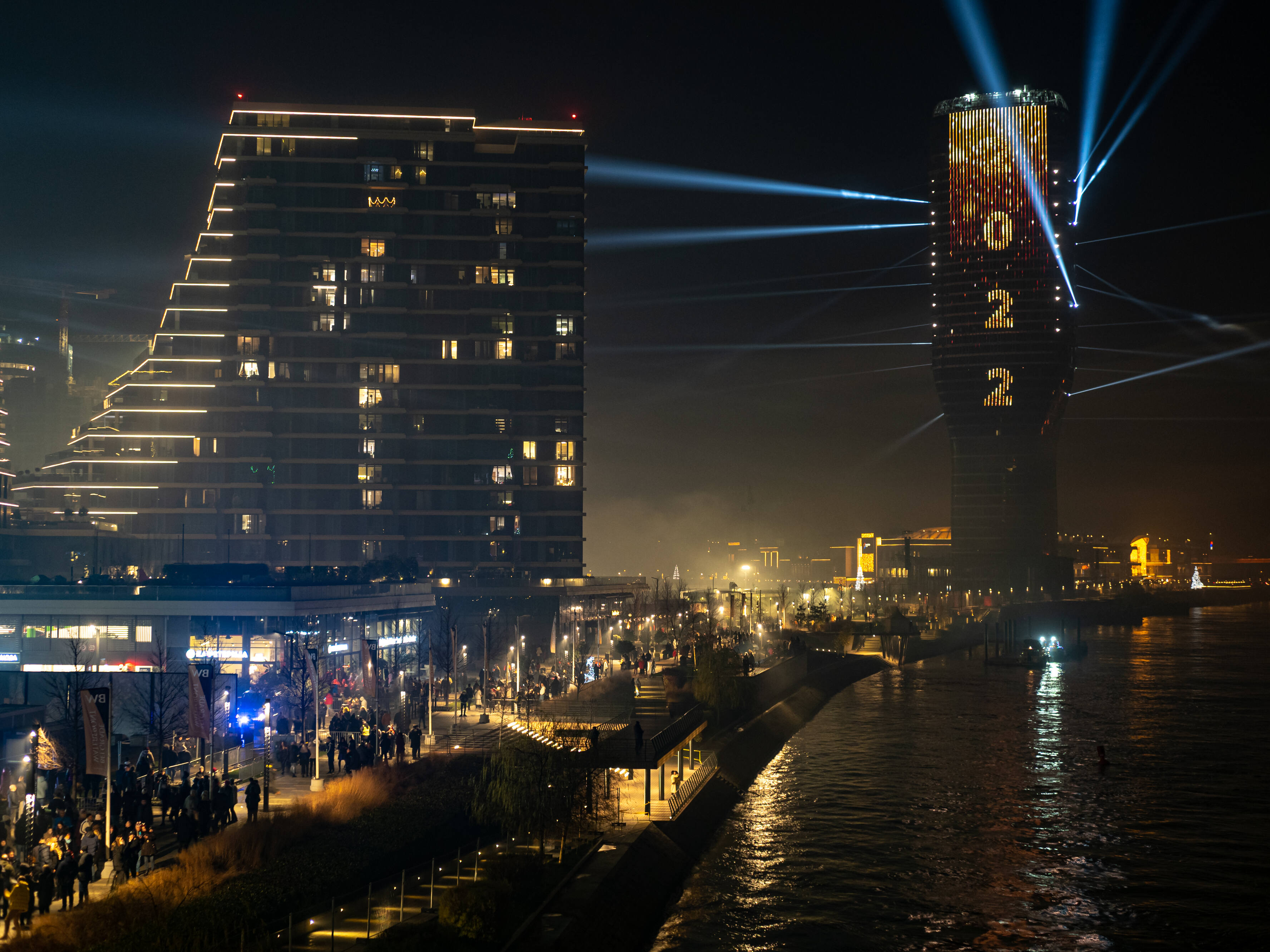 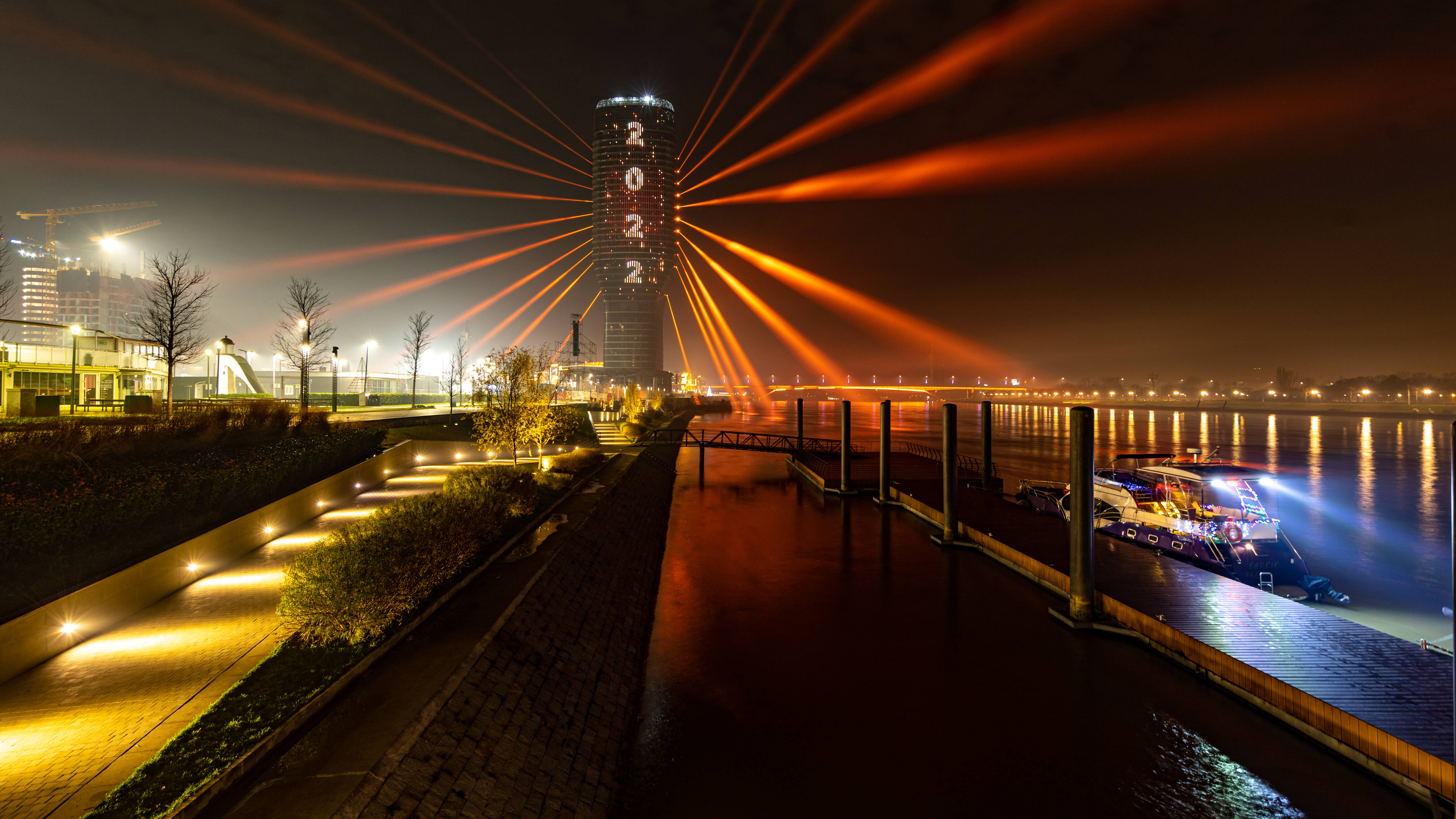 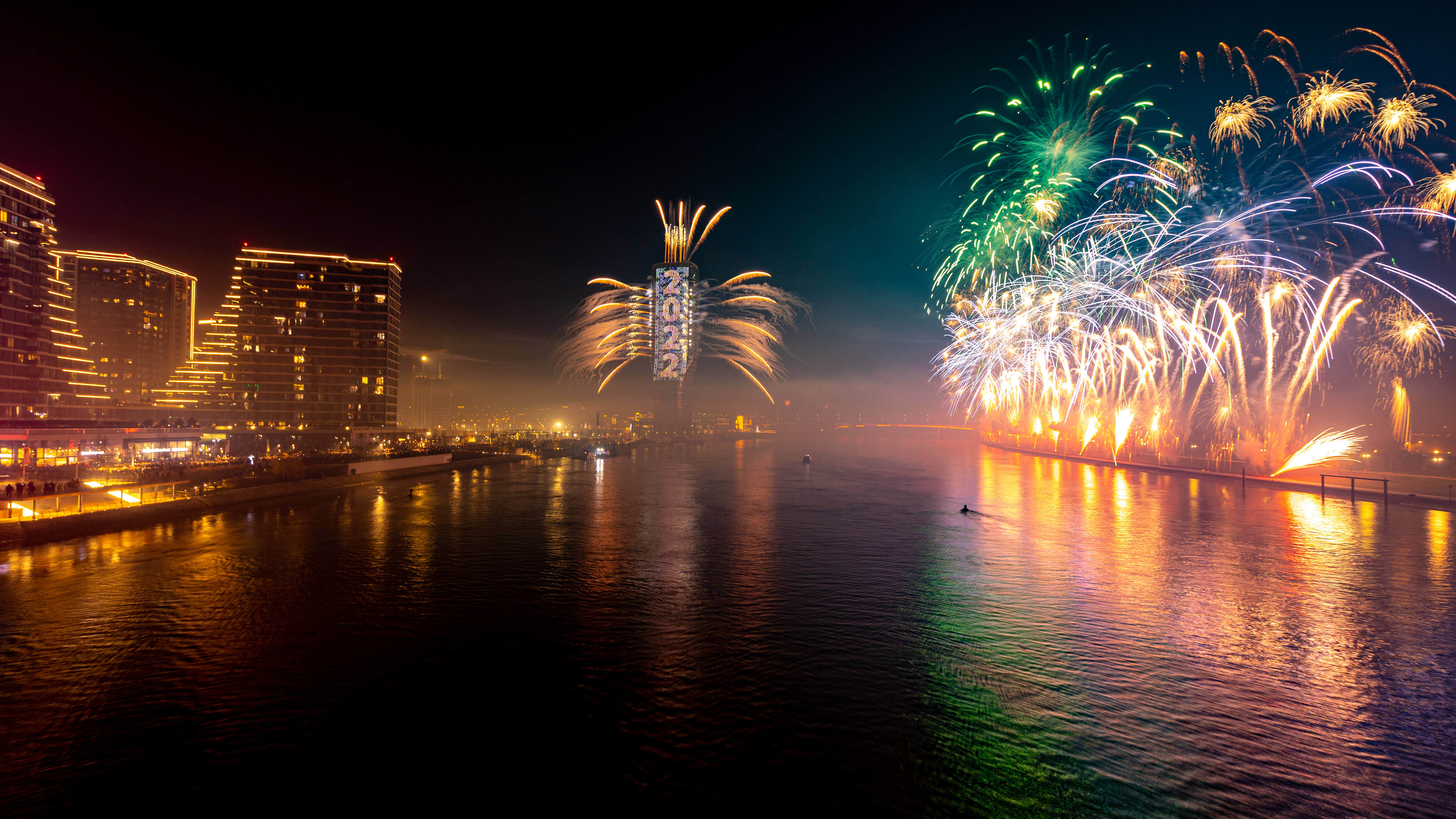 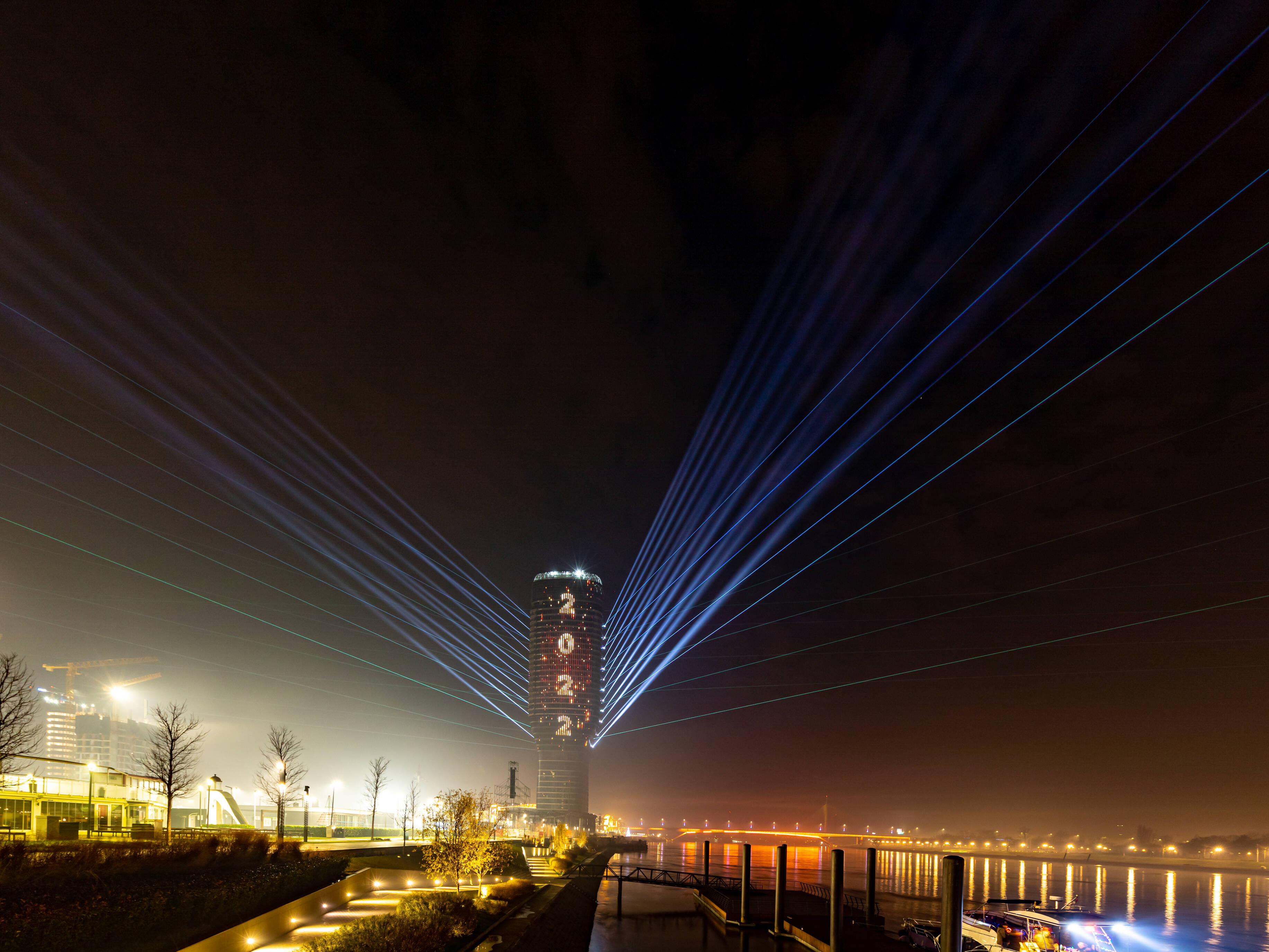 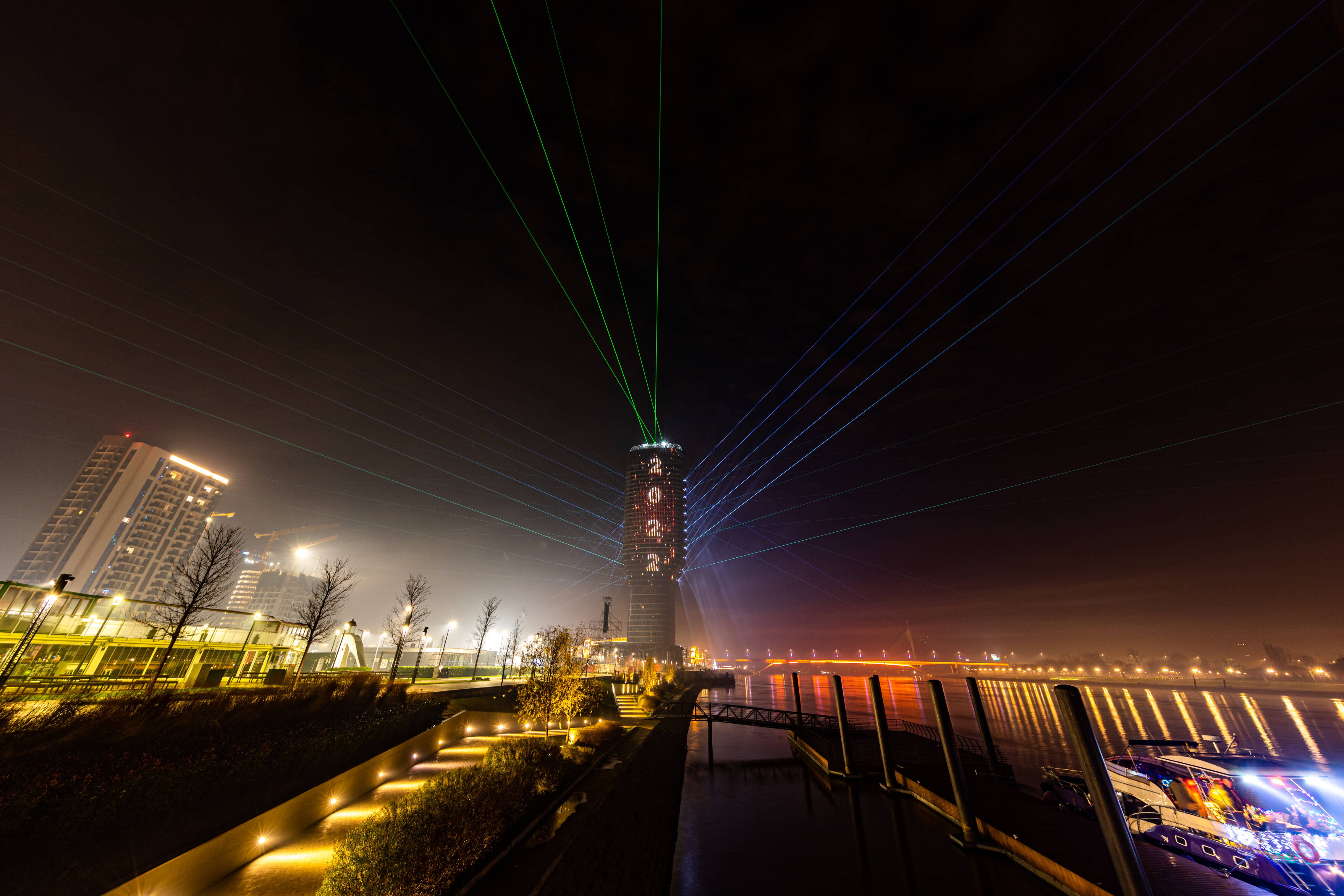 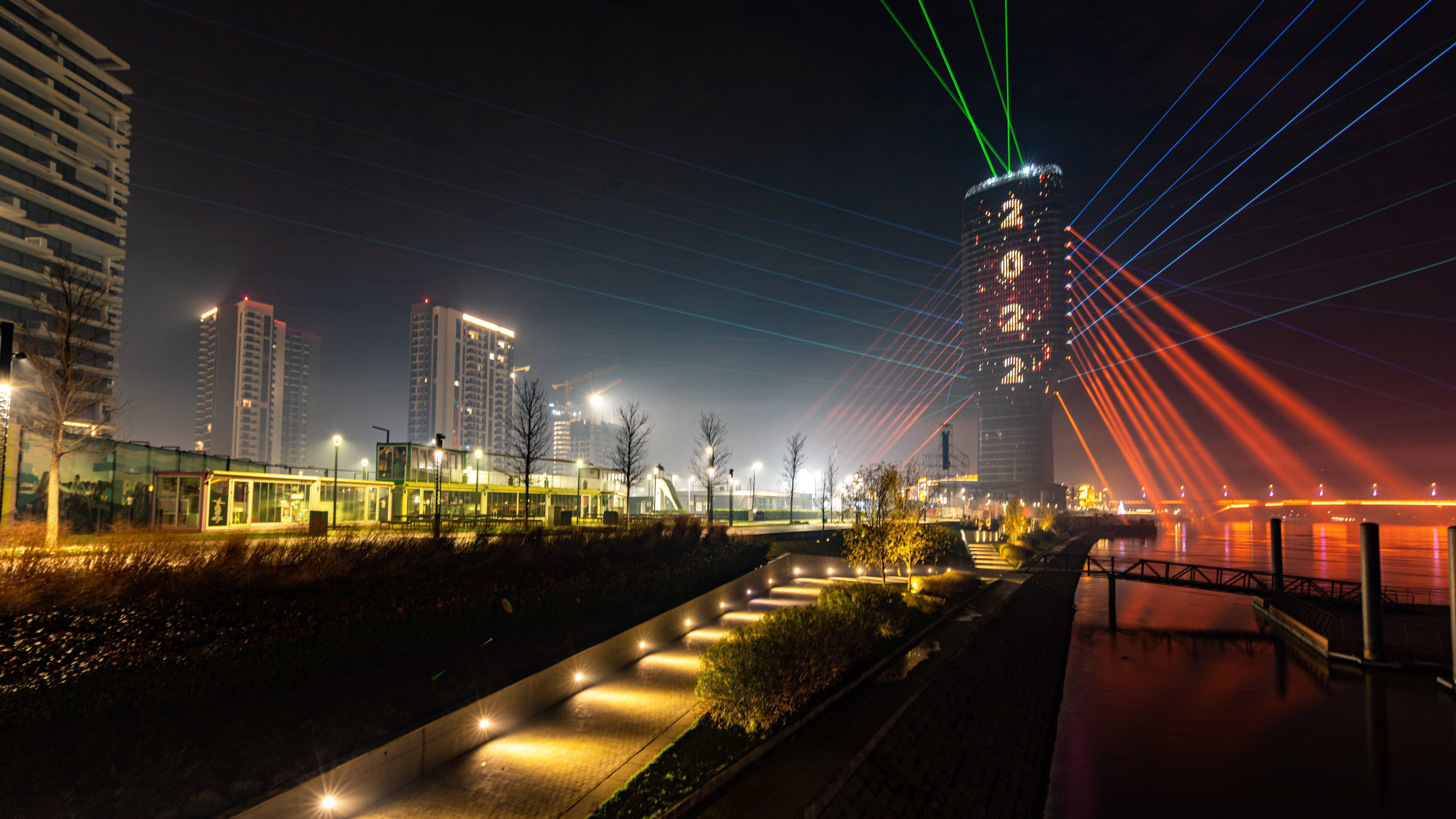 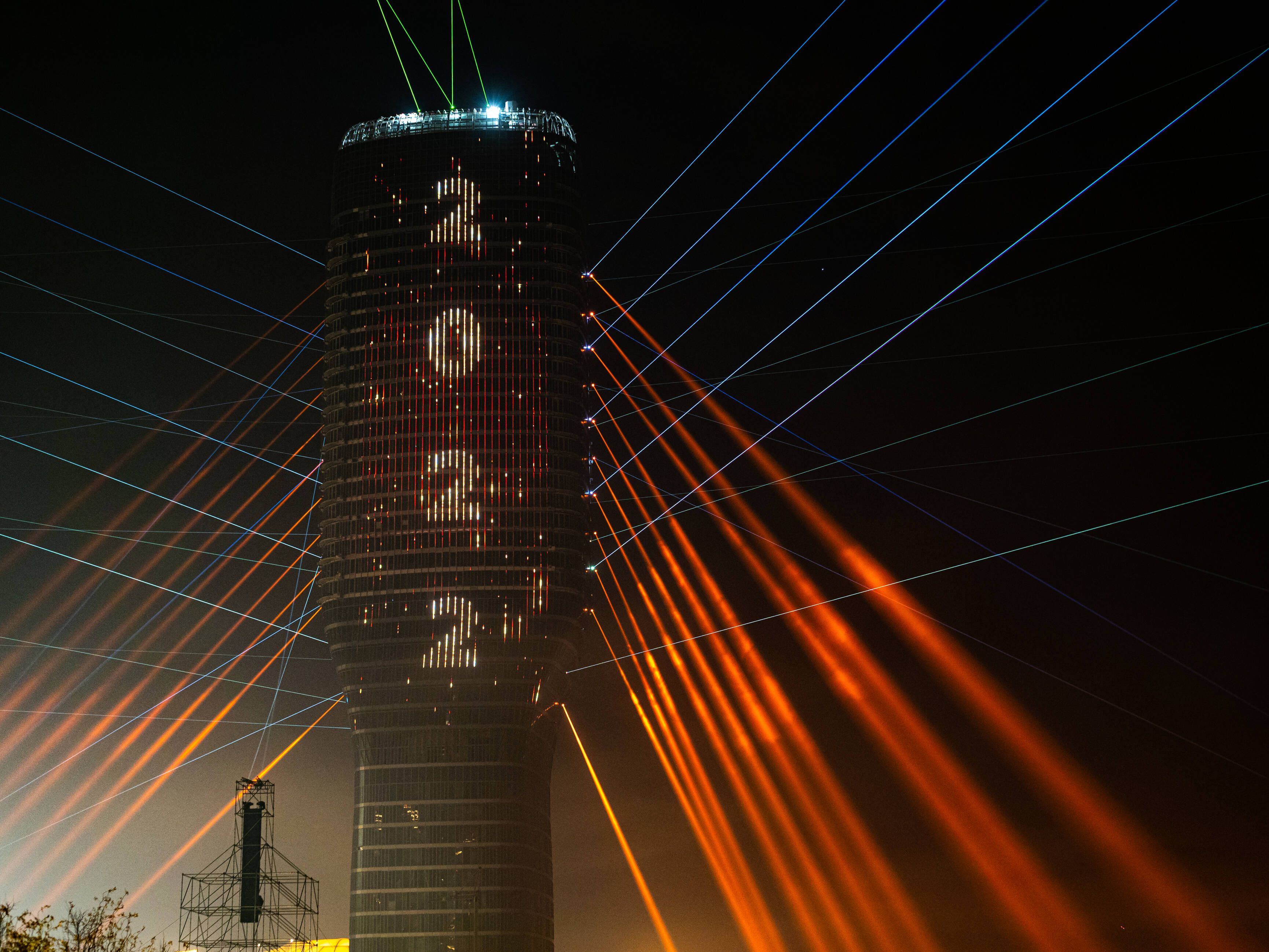 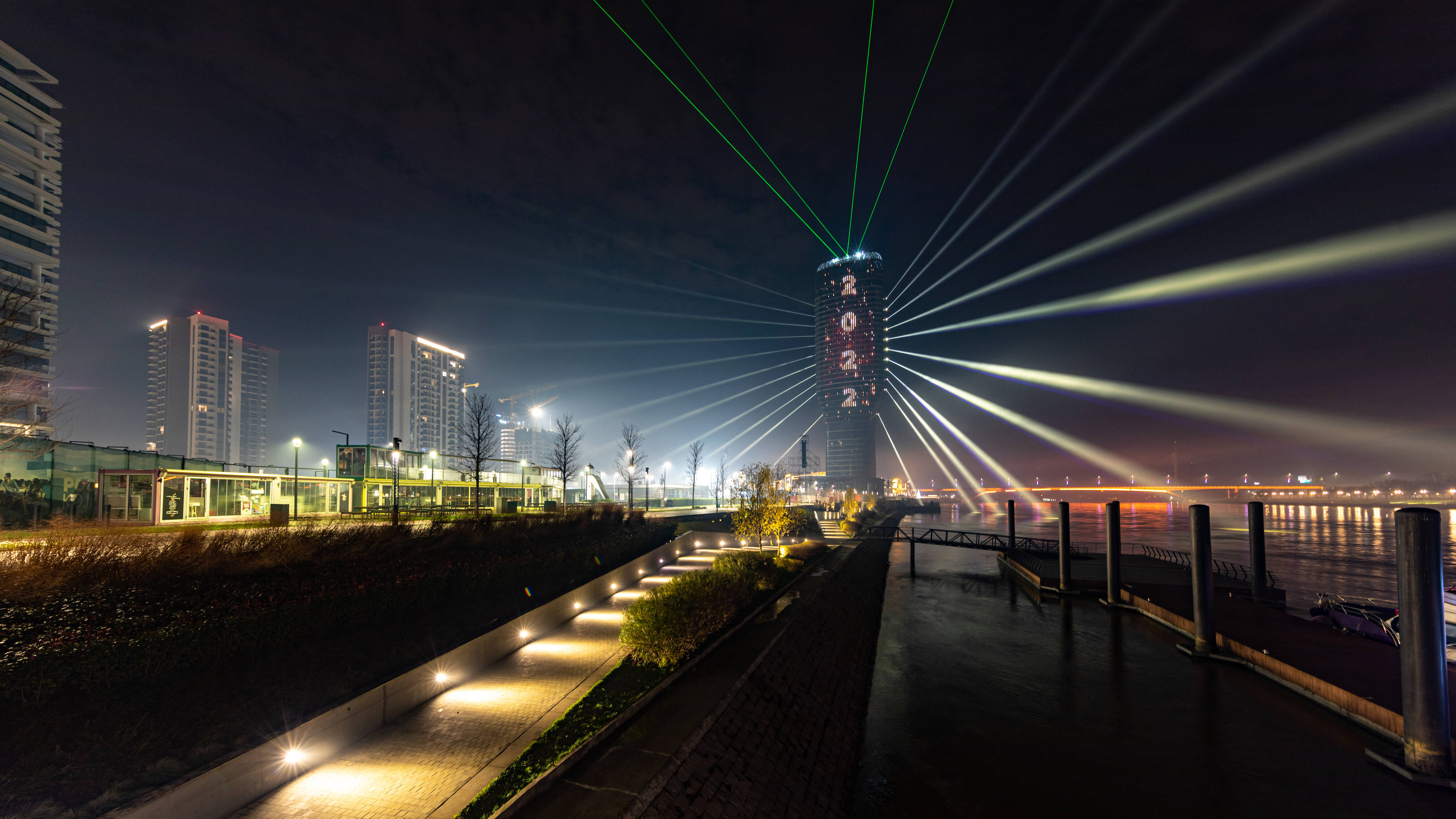 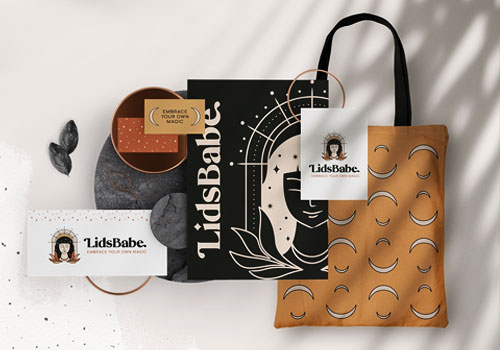 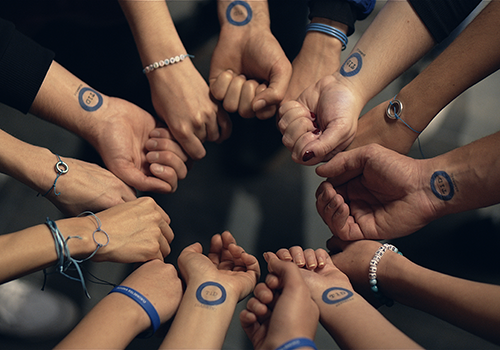 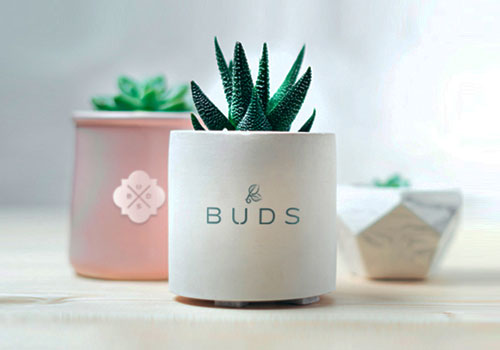 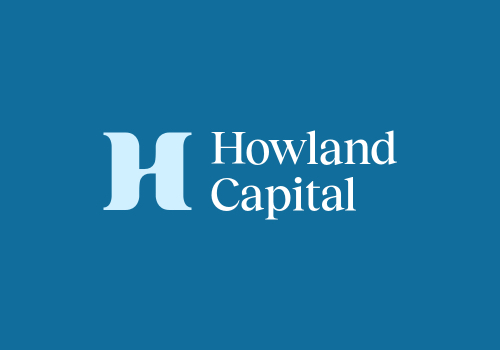